I recently was exposed to this chart during a presentation by Niel Dierks of the National Pork Producers Council. The ramifications are quite challenging to me as I discuss my Christian worldview in this blog. 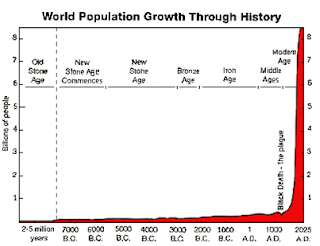 What would I say if this were a chart of the number of bacteria in a bottle of wine. I would say without hesitation that this kind of growth can not go on, it is "unsustainable". Eventually, the bacteria will use up all the available nutrients and the population will crash. Hopefully, for the person drinking the wine, this crash will be all the way back to zero.

But this isn't a chart of bacteria, or shoe prices. This is a chart of the number of people in the world!

If I conclude that this kind of growth is "unsustainable" I am faced with a challenge. The chart simply screams at me that there is an unavoidable disaster headed straight at us. The environmental and population control movements are motivated by the undeniability of this chart. Somehow, the number of people in the world is going to be limited by the availability of resources (food, fuel, shelter, etc) or human actions (population control, war, or whatever).

How is a Christian worldview to look at this?

I don't want the people of the earth to suffer the same fate as the wine bacteria but I abhor war and population control as solutions since I believe both offend God.

I suppose the first thing I recognize when confronted with the inevitable panic induced by this chart is that from my Christian perspective the world's resources aren't limited. Since I believe that the earth was created by God from absolutely nothing and that God is still closely involved in man's lives, He is perfectly capable of providing for all of my needs. Indeed, He has demonstrated this ability many times, and often will allow us to get ourselves into rediculous positions just to see if we are willing to depend on Him for provision. The Isrealites wondering around in the wilderness, surviving on manna, are a classic example. (Genesis chapter 16). That is not to say we should use resources carelessly, quite the opposite is true, but that we need to recognize what the chart does not. There are more resources available to the human condition than just those we can harvest from the earth.

The second recognition of my Christian heart to this chart is the future. I believe there is an end to this earth and in many ways it is dreadful and unpretty. The biblical book of Revelation is hard to understand but even a simple hog farmer like me can see that it is talking about a world in chaos, disaster, and dreadful death and despair. The bright light through it all is the promise of a new Heaven and a New Earth to those who believe and endure. There are many understandings of all the events in Revelation, but the picture of chaos followed by Christ restoring order by bringing new resources to the situation is undeniable. 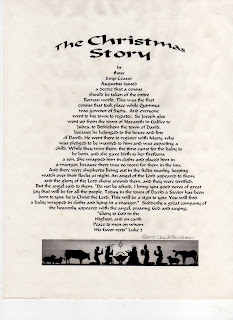 So I see this chart as a call to stewdship of resources with a levelheaded recognition of an impending end. We need to be prepared for the end personally, spiritually. This chart is a call to repentance and dependence on God. It is not a call to desperation and panic.

Thanks for your thoughtfulness.
Posted by charles wildman at 4:49 PM