One of our political leaders said, rather famously, that "WE have to pass this bill so you can find out what is in it." in referring to the Affordable Care Act. When we turn our attention to Comprehensive Immigration Reform, I don't want to be in that situation.

I fully support the need for Comprehensive Immigration Reform. I don't know anyone that is defending the current system as reasonable, fair, workable, or representative of the charitable values that flow deeply in the American mind and heart. I do not want my support to be understood as saying, "any legislation is better than doing nothing". What is in a piece of legislation is VERY important.

I feel we, as a nation, need to resist those who would create a stampede toward legislation and thereby create a chaotic situation that allows bad ideas to be introduced and passed. The list of those pressing very hard for passage of something is quite long but the ones I am most familiar with would be the American Farm Bureau in the farming community, Bibles, Badges, and Business in my church community, and the American Chamber of Commerce in my social community.

At the present, resistance is coming from the very large group of voters that see the needs of the 92 million US citizens that are out of work as a more pressing problem than the needs of the estimated 12 million non-citizens that may or may not have work. This group I recognize loosely around the "Stop Amnesty" expression. Here is an article that describes more of the Politics.

Both Houses of Congress have put forward public statements that show their intent to greatly expand the current E-verify system.

The Republican Principals contain this statement:


Employment Verification and Workplace Enforcement
In the 21st century it is unacceptable that the majority of employees have their work eligibility verified through a paper based system wrought with fraud. It is past time for this country to fully implement a workable electronic employment verification system
Here is a link to the Republican statement of Principles.

Here is a link that briefly describes E-verify.

As I understand it, an employer agrees to hire an applicant. Then the paperwork begins. One piece of this paper work is the I-9 which collects the applicant's identity information. This information is entered into the E-verify system. Some nameless, faceless, thing/person then returns one of three answers. 1) employment verified 2) DHS Temporary Non-confirmation or 3)SS Temporary Non-confirmation. Notice that two of the three responses leave both the employee and employer in a very uncertain position. Both are wondering, "Will this work out? How do we move forward?"

My concern with expanding this E-verify system is that it is the government collecting a lot of information on every person who gets a job in the US and then the federal government ultimately being the one that decides whether you can keep that job or not. I see this as a great loss of individual freedom.

A big part of the value of being a US citizen is that as a citizen you can take any job you are offered and leave it whenever you want to take another job that might improve your personal situation. The federal government has no role to play in your career choices. I am also concerned about the loss of personal privacy that comes with the government's data collection activities.

I described these concerns about privacy and freedom in my blog entitled Patrick Henry. 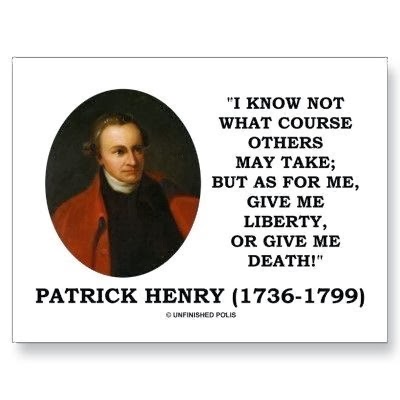 When I hear arguments about the definition of Amnesty, I often hear that the proposals aren't amnesty because the non-citizen is paying a price in time and fines in order to earn their right to be citizens. But this argument rings hollow. Legal citizens are forced to pay a price for the non-citizen's right to citizenship with a loss of individual freedom and privacy from the expanded E-verify system. This price is paid now and for every generation into the future. Once freedom is lost, it can not be gotten back.

I feel like this loss is an enormous price to ask people to pay to solve this problem and that another solution needs to be found. Let us not get into the situation of the Affordable Care Act and have to pass legislation to find out what is in it (or what it will cost for that matter).

What do you think?
Posted by charles wildman at 5:28 PM